His story through my eyes… 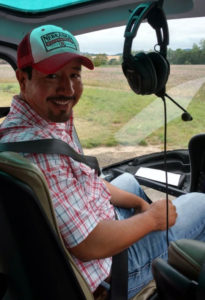 Mankind lost one of its best last week. After an intense battle with Non-small-cell Lung Cancer Edgar passed on July 13th, 2017. He was 38 years old. Edgar created a legacy that few men could match in twice the life time. He was a great friend, strong leader, and an amazing example of someone who lived the American Dream.

I met Edgar 20 years ago. We met while working together at Hermes Nursery. Edgar was working as a laborer on a seasonal work permit and I was a summer intern between my Junior and Senior year in College. We were just kids, a couple of grunts working side by side on the business end of shovels. He was shy, and I didn’t get to know him well that summer, but we developed a level of mutual respect. The following year he and a friend (Enrique) showed up my little tree farm. I was finished with school then and was working by myself growing a few trees. At that time, Enrique and Edgar’s English was poor and so was my Spanish, so it took a long time to establish that they were looking to leave Hermes and come to work for me. So, after a long game of charades we established that they were going to come to work with me, starting tomorrow at 7am earning $7.50 per hour. We all became friends quickly, and competed with one another vigorously, working together more like brothers than a boss and his employees.

Over the years the company and our friendship grew. We learned enough of each other’s language to be able to communicate well, and Edgar and Enrique became not only the first two employees of the company, but also the first foremen. Edgar was assigned to production from the very beginning, and he was the first employee I taught how to prune shade trees. He quickly learned how to operate all our machinery, and was also the first to dig trees at our farm. He was naturally selected to move to Missouri in 2005 when I bought my first farm and began Schwope Brothers Tree Farms.

Edgar joined me for Thanksgiving Dinner at Mom’s one year. I’ll never forget how special he made her feel with his compliments and big smile, and another year I visited him and his family over the winter in Villa Union, Edgar’s home town in central Mexico. It was truly an amazing experience to see what life is like there, and I understood why after he was married, he brought his wife to this country and made plans to raise a family here. And that’s exactly what he did. He and Jessica had a boy and a girl while living in a little apartment. I used to get on to him about buying a house here, and I offered over and over to co-sign with him. He would smile at me and say, “I know, I will, I’m saving for one.” Then one day after many years he asked me to go to lunch, and of course I said, “Sure. Jump in.” and he said, “No. you ride with me.” I thought that this was curious, but I did, and after lunch he drove me by the house that he had just bought. The smile on his face said everything. I had never seen such pride or satisfaction before. It was the pride of truly earning something.

During the 5+ years of the “Great Recession” and the total collapse of the nursery industry, life on the tree farm was difficult. During this time, a handful of individuals in our company exhausted significant efforts to pull us through. Edgar’s effort was monumental. I asked everyone to do more with less, and many times it felt like I was asking for the impossible, but Edgar consistently made the impossible, possible, and usually with a smile. Edgar put in more time, learned more, and fought harder during this period even though he was payed no more for his efforts. He had no ownership in the company, but he acted like an owner. He did whatever it took, and in turn was rewarded by feeling like an owner and feeling like a winner.

Over the past several years Edgar became a professional. He was a professional grower, a professional manager and respected leader. He managed half of the production at the largest tree farm in the country. Usually 50 men or more reported up through Edgar. Most of them professional also, because Edgar had taught them to be. He managed the herbicide applications, pruning, staking, grading, harvesting, and much more to execute the production and harvest processes. He managed his inventory meticulously, and could identify every variety of tree that we grow. One day years ago I asked him how many Scarlett Oak 2.5” he had left, on one of his farms. He promptly pulled out his personal smart phone, scrolled down and said “forty-six.” My jaw dropped, feeling stupid as I clutched my flip-phone in my own hand, and I asked, “How did you get your inventory into that phone?” He looked at me and said “I had to learn how to do it. I couldn’t remember all the inventory.” Then he smiled that smile we all know.

One year ago, exactly, Edgar was in Oregon touring nurseries with several people from our company. It was a great trip for Edgar, he was like a sponge soaking up information, and having fun. On the trip, he and I shared a hotel room, and I was really surprised how much he coughed. I asked him if he felt alright, and he said that he felt fine, but couldn’t get rid of the cough. Ultimately, two months later he was diagnosed with stage 4 lung cancer. The doctor did not hesitate from the beginning when he told Edgar that there is no cure. No permanent recovery. I was with him when he received the news and will always remember the gravity of the moment, and the grace with which Edgar took the news. Over the 10 months that followed there was only more sad news, more pain and suffering. I admired his resolve over this time. He never changed. Every time I saw him, he smiled. Every time he had a difficult decision to make, he acted. He never gave up hope and never complained, and when cancer had taken his body away from him, his mind and spirit remained strong enough to carry the burden of preparing his friends and family for his passing.

I will remember Edgar forever. The impact he made on our company, and the culture he helped forge, contributed greatly to the success we have enjoyed and will enjoy in the future. Up to the very end, every time I saw him, he thanked me……. He thanked me for providing him an opportunity……… and I thanked him for taking advantage of it. We will never know what more he could have achieved with the other half of his life that cancer stole from him, but we know for sure the time he spent with us was impactful. Powerful. He created a life for his family in a new country and lifted them up out of poverty to the middle class without breaking a sweat. He earned every opportunity he was given, and took advantage of them all. He never gained from someone else’s loss and went to earnest efforts to put others in a position to be successful. Everyone loved him. Everyone respected him, and we will never forget him.

Even though Edgar’s death was a tragedy, his life was a triumph. He set an example for all of us how to live, how to lead, and how to treat others. His efforts have impacted the lives of everyone in our company, because the organization would most likely not have been able to be built without his efforts. His story will inspire others to take advantage of the opportunities in front of them for many years to come. His legacy will live on.

If you would like to request pricing please visit our registry page [here] and a member of our team will connect with you.